Dress Up Your Minitest Output

Ruby folks are known to be a hyperactive lot, and it seems like few things in the Ruby world are as subject to change as the new hotness in testing. Over the years, I’ve used Test::Unit and RSpec at various times with a whole array of complementary libraries for test data and mocking and assertions and so on. At the moment though, I’m using relatively unadorned Minitest for most projects. Why? Like a lot of people, I like that it’s straightforward to use and takes no time to load up, but I’m also finding that the simplicity of the library means that it’s pretty easily customizable - either using third-party gems or with a little bit of hacking on your own.

The output that Minitest produces by default is pretty basic, printing a dot for each passing test and a letter F for each failure. 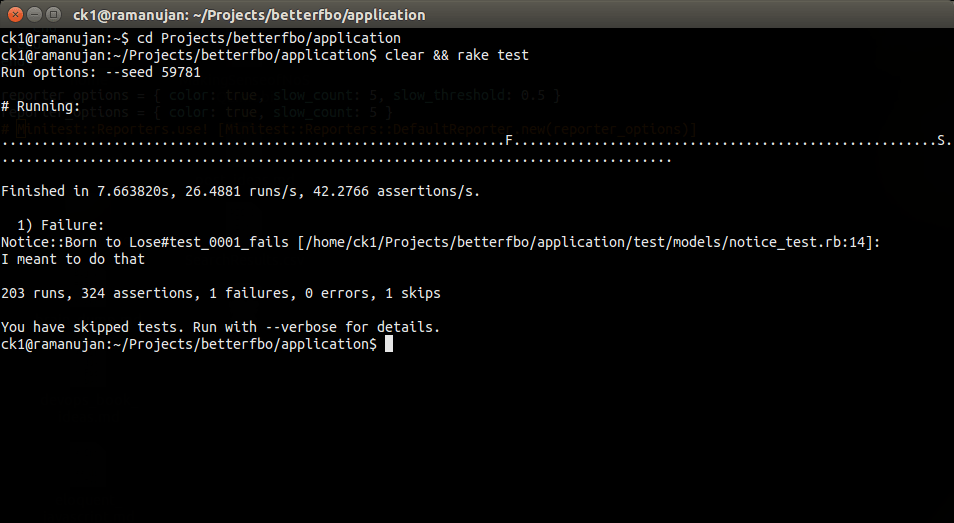 That’s a decent place to start, but the bigger my test suite grows, the more I want those super-obvious visual cues that let me know what’s going on with my tests. Minitest makes it easy enough to hack some of these things in on your own, but to save time, I can use the minitest-reporters to give myself a set of baseline hooks to use and customize for better Minitest output. It provides a bunch of alternate formatters based on Minitest::StatisticsReporter that provide options for customizing your test output.

To get started, you’ll need to add the gem to your Gemfile as follows:

And then you just need to add a few lines to your test_helper.rb file to get started with a basic configuration. (The examples that follow are real and taken from my current project which happens to be a Rails application, but nothing in the gem prevents its use with non-Rails projects.)

Just a few lines, and now I’ve got red-green coloring on my tests indicating pass-fail. Nice. 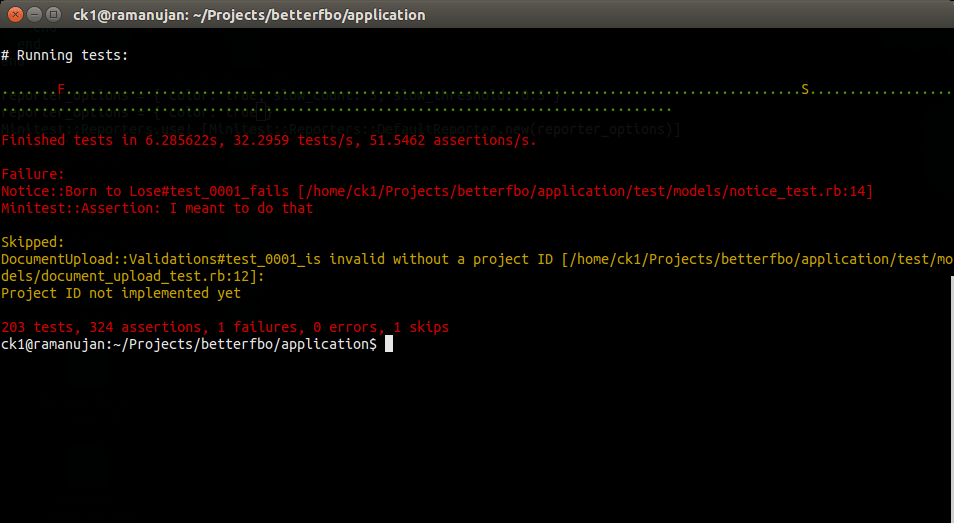 Another option that the DefaultReporter class has that I didn’t know about until recently is the ability to list out the N slowest running tests from the suite by specifying a value for the :slow_count option. 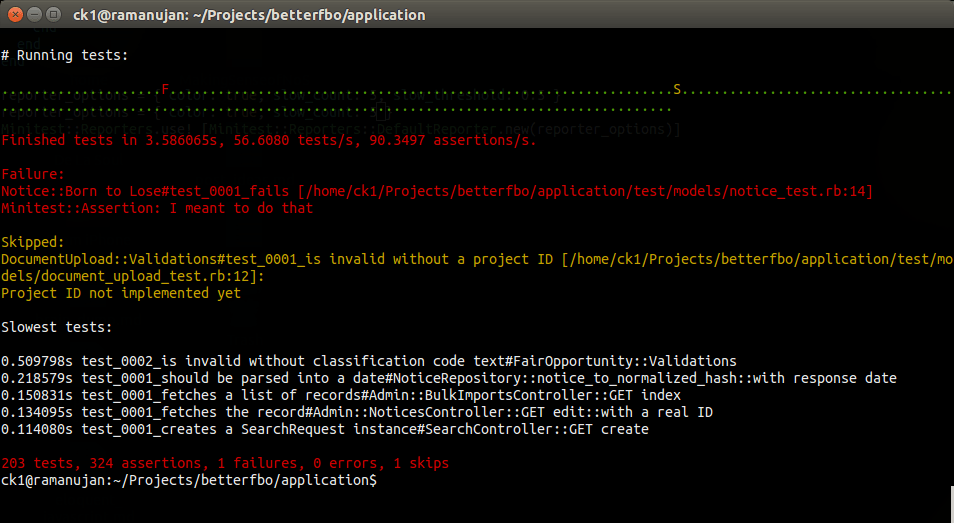 A feature like this, while awesomesauce, is still subject to the limitations of Ruby (random garbage collection) and Rails (stack initialization) and might not be all that useful to you if you’re running a small test suite. Still, if you notice that the same tests are consistently showing up on that list, it might be time to take a look to see what you can do about it.

Next, I need to make a few changes to save my old and broken eyes because, lucky me, I’ve had problems with colors since I was a kid - both distinguishing them (browns look like greens, blues look like purples, etc.) and seeing them at all unless there’s sufficient contrast with the background. In particular, the red-on-black error text is a bit of a pain for me to make out, so I wanted to change the color to something a little brighter. The ANSI escape codes only allow for 16 colors, but fortunately, we can subclass Minitest::DefaultReporter to produce the desired behavior. I’d suggest something like this: 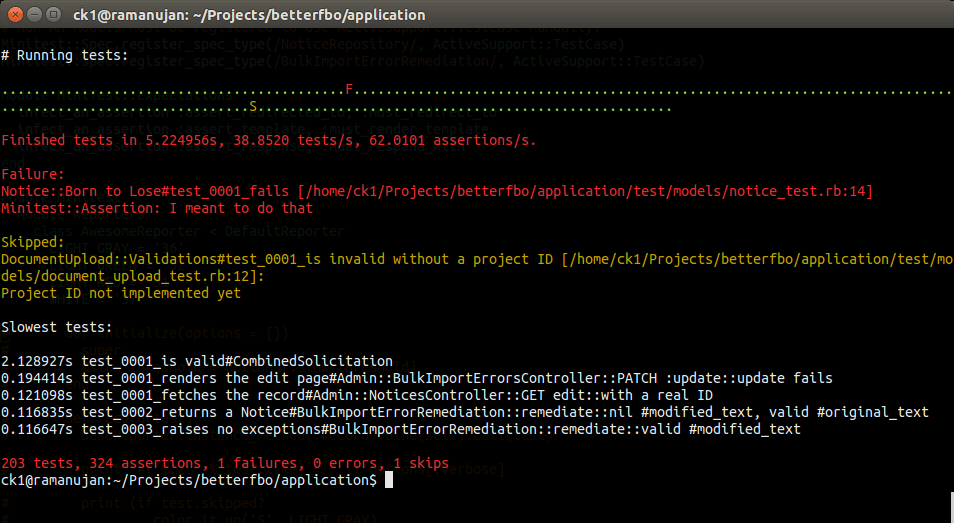 Well, at least it’s readable against the background. I’m still probably going to tweak the color settings in my terminal. :)

Finally, it would be nice, especially as the test suite grows and I add more and more extensive integration and acceptance tests, to provide an immmediate indication when a test runs longer than a certain threshold time. The way that DefaultReporter is currently implemented doesn’t really lend itself to making the kind of change I have in mind, so I’ve created my own fork of the gem and submitted a pull request that provides an easier way change the output for successful, failed, and skipped tests. I’ll just replace the Gemfile entry I added previously and have it point to my own repo and branch like so. (See update at the end of this post.)

And then I can modify my AwesomeReporter class so that it accepts a :slow_threshold option and formats the output for successful tests based on the test run time.

We end up with testing output that says a lot about the current state of the application at a glance. By drawing our attention to critical pieces of information, we can use this output to drive development to the areas that need our effort. 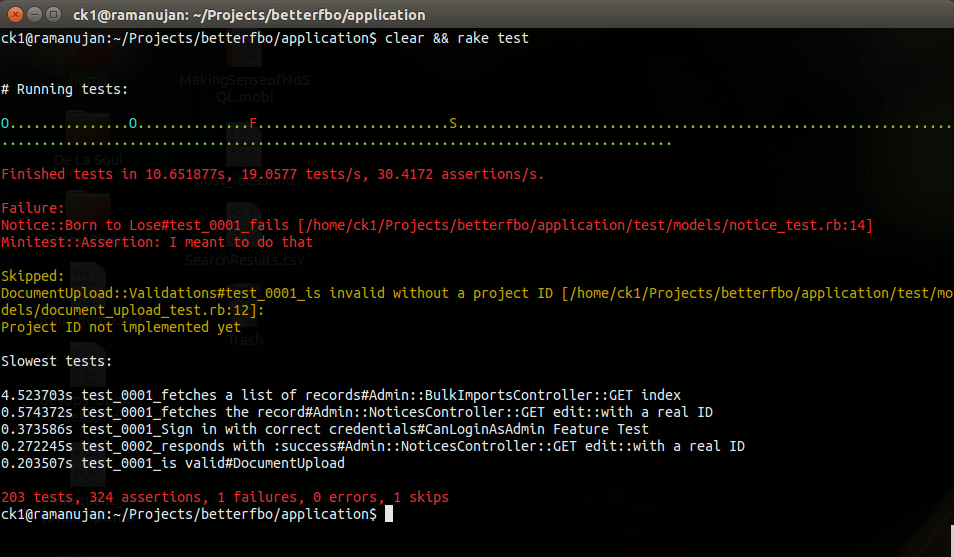 Update: The above-mentioned pull request was merged by the maintainer of Minitest::Reporters, so it’s now recommended to refer directly to the mainline gem in your Gemfile: